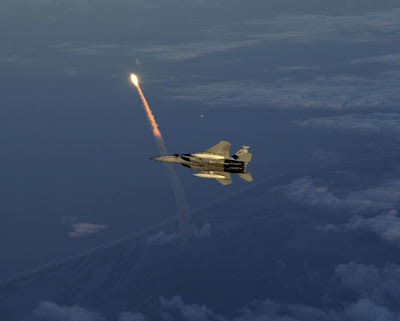 This is probably going to kill my bandwidth, but I thought you might like these two cool photos of F-15s flying over Kennedy Space Center during an unidentified Shuttle mission. I received them from a buddy who is still in the Air Force, but they may not be anything related to the latest mission. The photo at left shows an F-15 flying by the Space Shuttle as it sits on the launch pad. The photo at right shows an F-15 flying with the Shuttle roaring towards Earth orbit. I got a ride in the two-seat F-15E Strike Eagle as a cadet at the Air Force Academy in the summer of 1992. 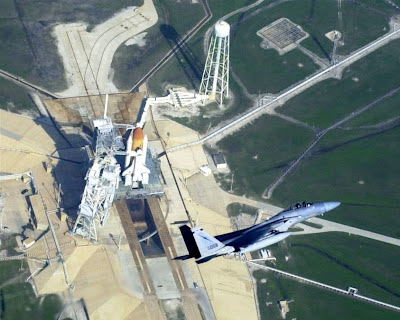 Here are some older pictures, of a similar nature:

Richard Bejtlich said…
Thanks for your comment. All of the photos in the link you sent were in the same batch from which I drew the two I posted. I have modified my post to indicate I don't know for sure when these photos were taken.
8:05 PM

Joao Barros said…
Neat!
Those photos were most probably taken from another F-15 flying formation.
Richard, got to say I envy you for flying on an F-15 :)
Better than that only a flight on an F-14 launching from a carrier!
Ok.... got a better one... Spaceshuttle!!! :D

Has anyone witnessed a launch live?
9:56 PM