Showing posts from March, 2019
Show all

Last week I attended my first OSSEC conference. I first blogged about OSSEC in 2007, and wrote other posts about it in the following years. OSSEC is a host-based intrusion detection and log analysis system with correlation and active response features. It is cross-platform, such that I can run it on my Windows and Linux systems. The moving force behind the conference was a company local to me called Atomicorp . In brief, I really enjoyed this one-day event. (I had planned to attend the workshop on the second day but my schedule did not cooperate.) The talks were almost uniformly excellent and informative. I even had a chance to talk jiu-jitsu with OSSEC creator Daniel Cid, who despite hurting his leg managed to travel across the country to deliver the keynote. I'd like to share a few highlights from my notes. First, I had been worried that OSSEC was in some ways dead. I saw that the Security Onion project had replaced OSSEC with a fork called Wazuh, which I learned is a
Post a Comment
Read more 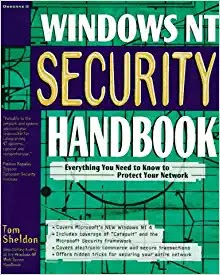 Recently I've been reading about cloud security and security with respect to DevOps. I'll say more about the excellent book I'm reading, but I had a moment of déjà vu during one section. The book described how cloud security is a big change from enterprise security because it relies less on IP-address-centric controls and more on users and groups. The book talked about creating security groups, and adding users to those groups in order to control their access and capabilities. As I read that passage, it reminded me of a time long ago, in the late 1990s, when I was studying for the MCSE, then called the Microsoft Certified Systems Engineer. I read the book at left, Windows NT Security Handbook, published in 1996 by Tom Sheldon. It described the exact same security process of creating security groups and adding users. This was core to the new NT 4 role based access control (RBAC) implementation. Now, fast forward a few years, or all the way to today, and consider the
2 comments
Read more
More posts