Showing posts from October, 2017
Show all

How to Minimize Leaking 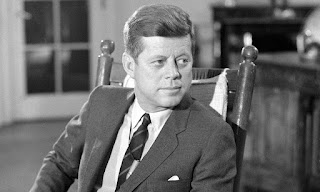 I am hopeful that President Trump will not block release of the remaining classified documents addressing the 1963 assassination of President John F. Kennedy. I grew up a Roman Catholic in Massachusetts, so President Kennedy always fascinated me. The 1991 Oliver Stone movie JFK fueled several years of hobbyist research into the assassination. (It's unfortunate the movie was so loaded with fictional content!) On the 30th anniversary of JFK's death in 1993, I led a moment of silence from the balcony of the Air Force Academy chow hall during noon meal. While stationed at Goodfellow AFB in Texas, Mrs B and I visited Dealey Plaza in Dallas and the Sixth Floor Museum . Many years later, thanks to a 1992 law partially inspired by the Stone movie, the government has a chance to release the last classified assassination records. As a historian and former member of the intelligence community, I hope all of the documents become public. This would be a small but significant step towa
Post a Comment
Read more
More posts