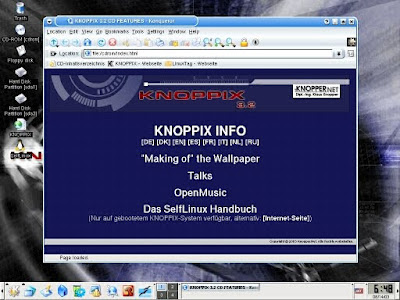 Several people have told me to try Knoppix, a bootable Linux distro that runs in a RAM disk. I gave it a shot, running it straight from my CD-ROM drive and then within a virtual machine to acquire screen shots. This is a great idea if you want to try Linux without installing a full distro on your hard drive. Knoppix is entirely memory-resident, so if you power off your machine Knoppix disappears. I must note that upon restarting my Windows XP laptop after running Knoppix, it bluescreened when the Windows logo disappeared. A hard shutdown fixed the problem, which must have had something to do with memory contents.

Knoppix loads directly from the CD-ROM, and drops users into a KDE desktop. Knoppix is based on Debian. You can read the software included on the Knoppix web page. My friends like Knoppix because it has vast driver support for peripherals, making their lives easier.

A special Security Tools Distribution is available. This poorly named "STD" distro includes tools commonly used by security professionals. The developer had STP in mind, but please! I think I'll try STD next, but for testing purposes won't burn the .iso to a CD-ROM. Rather, I'll mount the .iso as a "fake" CD-ROM in VMWare. (I tried this with nmrcOS. While the overall nmrcOS project is interesting, I found the author's political comments and use of expletives in the message of the day to be juvenile.)

I know of some security researchers who do their programming within Knoppix, so others can try their software on a similar platform without much trouble. This is actually a powerful idea. The programmer knows exactly what the user brings to the table if he's using a stock Knoppix distro. If the user has modified or created his own Knoppix distro, then all bets are off. However, if programmer and user each operate the same Knoppix distro, they can be sure software designed by the programmer will work for the user.