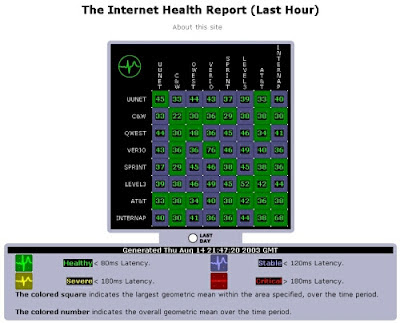 Yesterday just after 6 pm eastern I checked the Internet Health Report to see if the east coast blackout was affecting the Internet. I didn't see anything out of the ordinary.

Looking at the Internet Traffic Report, however, as of this writing a core router in Michigan, danu.ili.net (209.115.84.254), appears down. Since my father-in-law in Michigan reported he's still without power, maybe that's the cause. Of the 78 routers monitored in North America by the ITR, only a handful are in the affected states. Most of those didn't see major problems during the outage, so they must have had backup power. Oddly, besides the ili.net router, denver-br2.bbnplanet.net (4.0.0.118) and atl1-core1-l0.atlas.algx.net (165.117.1.76) are also completely down right now.