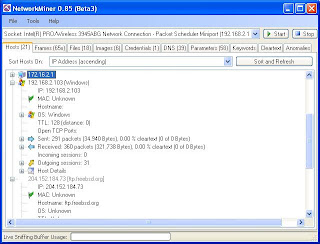 Thanks to the great Toolsmith article by Russ McRee, I decided to try Eric Hjelmvik's NetworkMiner, a Windows-based network forensic tool.

You might think that Wireshark is the only tool you need for network forensics, but I maintain that Wireshark (while a great tool) is best used for packet-by-packet analysis. 95% of network forensics investigations are mostly concerned with the application layer data passed during a transaction, not the value of the initial sequence number sent in a SYN segment.

I intend to keep an eye on NetworkMiner because it's free and very easy to use. It would be great to see functionality in NetworkMiner merged into Wireshark. For example, I don't see any reason to implement feature requests for parsing any protocol that Wireshark already supports (which is basically every protocol that matters). NetworkMiner should focus on content extraction and perhaps leverage Wireshark where it can.

One of the reasons I started developing NetworkMiner was actually because I wanted to learn the commonly used networking protocols in better detail. I found that reading RFCs/specs, looking at network traffic and implementing code to parse the protocols was a really good way of learning them!

I do, however, agree with you that good content extraction and presentation is the key to create a good network forensic analysis tool. But I guess I will continue implementing protocol parsers my own way in the future as well, but my focus will be on how the forensic-relevant information extracted from the protocol can be best presented to the user. Data mining is all about leveraging data to information, which can be used to create knowledge.
3:01 AM

xnih said…
Depending on what your goal is, you may also like Satori which does passive OS identification. Erik does a good job with NetworkMiner on implementing DHCP and TCP fingerprinting from it (along with TCP fingerprinting from p0f and Ettercap), but if your ultimate goal is just to fingerprint the device, check out Satori [ http://myweb.cableone.net/xnih ]
10:17 PM

xnih said…
And it is years later, but Satori has moved to: http://chatteronthewire.org
11:22 PM