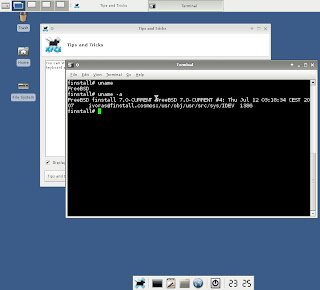 Ivan Voras posted word on his FreeBSD development blog that he built a FreeBSD 7 LiveCD. This is part of his 2007 Google Summer of Code project, finstall, a graphical FreeBSD installer that's also a live CD.

I think this is great. Booting the installer as a live CD lets a user see if FreeBSD recognizes hardware before committing to an installation. The user also gets to play with FreeBSD without making any changes to the production system. I downloaded the .iso and booted it in VMware to take the screen capture at left. Right now the system doesn't do much, and the keyboard mapping isn't English. (For example, obtaining the - key required me to hit the / key.) I am excited to see this and it would be great to have it ready for FreeBSD 7. I do not think it will happen, but we'll see.

IP can easily be tunneled over a plethora of network protocols at various layers, such as IP, ICMP, UDP, TCP, DNS, HTTP, SSH to name a few. While a direct connection may not always be possible due to a firewall, the IP packets could be encapsulated as payload in other protocols, which would get through. However, each such encapsulation requires the setup of a different program and the user has to manually probe different encapsulations to find out which of them works in a given environment.

The aim of this project is to implement the Super Tunnel Daemon, a tunneling daemon using plugins for different encapsulations and automagically selecting the best encapsulation in each environment.

That sounds like a nice capability for malicious users.
freebsd

Anonymous said…
The keyboard layout of this FreeBSD 7 LiveCD is Croatian (Ivan Voras lives in Croatia) and it can be easily switched to US layout using this X command: setxkbmap us
3:27 AM