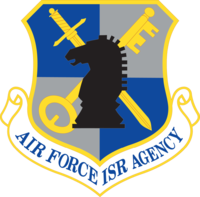 A friend from my AFCERT days left a comment indicating that the 33 IOS split into two different squadrons, the 33 NWS (the old AFCERT) and the 91 NWS. This prompted me to look at the organizational structure of my old Air Force units.

It looks like AFISR has lost information operations duties since it's now an "ISR" agency. According to Air Force ISR Agency, the AF/A2 says:

That's news to me. I think AIA was doing those missions previously, but Deptula wants a single agency responsible for all of it. He gets that with AFISR. Information operations are now part of Air Force Cyber Command, which apparently will become active this fall.

I have mixed feelings about AIA's fate. Lt. Gen. Deptula is a three-star, which outranks previous top intel generals (who were two-stars). Putting a three-star with ISR responsibilities at HQ AF will probably give ISR greater attention. However, the word "intel" appears three times in Deptula's bio -- all in relation to his existing job. He's a career F-15 driver, so once again we have a pilot as the Air Force's "top intel guy." This is sad. Are there no good Air Force intel generals available? Hopefully the new AFISR commander, Maj. Gen. John C. Koziol, will be able to step up when Deptula moves on.

The only saving grace in this situation is that the king of all intel officers continues to be Gen. Michael Hayden, Director of the Central Intelligence Agency.
afcert Air Force history

Anonymous said…
I hope I can still find an AIA patch for my shadow box (and more specifically the 480th IG in which I served). I was hoping to start on one soon seeing as how most of the units I served in are now defunct.
11:49 PM

jbmoore said…
I think sad is an understatement. Anytime someone without the proper credentials is placed in such a sensitive position, it makes the people's job under him that much harder because they have to educate him. If he doesn't care to learn, then they are in an unwinnable position and you have MR's codependence situation that he elegantly extolled in his last podcast. Robin Old's has similar stories when the fighter jocks weren't taught dogfighting skills and didn't even have guns, but missiles during Vietnam. His commander was a missile man who didn't understand or appreciate air combat. They lost a lot of aircraft and men because of that decision until they came around and changed their mindset. You can't fix stupid to quote Ron White. Same goes for willful ignorance.
6:24 PM

Anonymous said…
This comment has been removed by a blog administrator.
4:02 PM