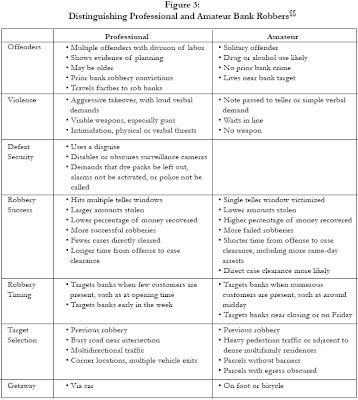 This evening I watched part of a show called American Greed that discussed the Wheaton Bandit, an armed bank robber who last struck in December 2006 and was never apprehended.

Several aspects of the story struck me. First, this criminal struck 16 times in less than five years, only once being repelled when he was detected en route to a bank and locked out by vigilant tellers. Does a criminal who continues to strike without being identified and apprehended bear resemblance to cyber criminals? Second, the banks did not respond by posting guards on site. Guards tend to aggravate the problem and people get hurt, according to the experts cited on the show. Instead, the banks posted greeters right at the front door to say hello to everyone entering the bank. I've noticed this at my own local branch within the last year, but thought it was an attempt to duplicate Wal-Mart; apparently not. Because the robber also disguises himself with a balaclava (pictured at right), the bank banned customers from wearing hoods, sunglasses, and other clothing that obscures the face in the bank.

Third, improved monitoring is helping police profile the criminal. Old bank cameras used tape that was continuously overwritten, resulting in very grainy imagery. Newer monitoring systems are digital and pick up many details of the crime. For example, looking at recent footage the cops noticed the robber "indexing" the gun by keeping his index finger away from the trigger, like we learned in the military or in law enforcement. They also perceived indications he wears light body armor while robbing banks. Finally, one of the more interesting aspects of the show was the reference to a DoJ Bank Robbery (.pdf) document. It contains a chart titled Distinguishing Professional and Amateur Bank Robbers, reproduced as a linked thumbnail at left.

I understand the purpose of the document; it's a way to determine if the robber is an amateur or a professional. This made me consider some recent posts like Threat Model vs Attack Model. A threat model describes the capabilities and intentions of either a professional bank robber or an amateur bank robber. An attack model describes how a robber specifically steals money from a particular bank. Threat models are more generic than attack models, because attack models depend on the nature of the victim.

Watching this show reminded me that security is not a new problem. Who has been doing security the longest? The answer is: physical security operators. If we digital security newbies don't want to keep reinventing the wheel, it might make sense to learn more from the physical side of the house. I think convergence of some kind is coming, at least at some level of the management hierarchy.

If you argue that the two disciplines are too different to be jointly managed, consider the US military. The key warfighting elements are the Unified Combatant Commands, which can be headed by just about any service member. Some commands were usually led by a general from a certain service, like the Air Force for TRANSCOM, but those arrangements are being unravelled. Despite the huge Army occupation in the Middle East, for example, the next CENTCOM leader is a Naval officer, and so is the next Chairman of the Joint Chiefs. Even the new head of SOCOM is Navy. This amazes me. When I first learned about Joint warfare, the joke was "How do you spell Joint? A-R-M-Y." Now it's N-A-V-Y.

For more on this phenomenon, please read Army Brass Losing Influence, which I just found after writing this post.

Perhaps we should look to a joint security structure to combine the physical and digital worlds? That would require joint conferences and similar training opportunities. Some history books with lessons for each side would be helpful too.
favorites philosophy threat model threats topcan

Anonymous said…
That picture is SO Photoshopped.
8:56 AM

CG said…
not to totally state the obviously but all the NACs, tuned snort boxes, firewalls, etc are for not if you don't have a solid handle on physical security of your office, building(s), workspaces, server rooms, etc.

Anonymous said…
This comment has been removed by a blog administrator.
6:45 AM