June 23, 2007
I'm happy to announce three new Amazon.com reviews, partially due to my flights between Washington Dulles and San Jose for USENIX 2007. The first is two stars (yes, unfortunately) for Practical Packet Analysis by Chris Sanders. From the review:

To use "American Idol" lingo, you've already read reviews by Randy Jackson and Paula Abdul. It's time for the truth from Simon Cowell -- Practical Packet Analysis (PPA) is a disaster. I am not biased against books for beginners; see my five star review of Computer Networking by Jeanna Matthews. I am not biased against author Chris Sanders; he seems like a nice guy who is trying to write a helpful book. I am not a misguided newbie; I've written three books involving traffic analysis. I did not skim the book; I read all of it on a flight from San Jose to Washington Dulles. I do not dislike publisher No Starch; I just wrote a five star review for Designing BSD Rootkits by Joseph Kong.

PPA is written for beginners, or at least it should be intended for beginners givens its subject matter. It appears the author is also a beginner, or worse, someone who has not learned fundamental networking concepts. This situation results in a book that will mislead readers who are not equipped to recognize the numerous technical and conceptual problems in the text. This review will highlight several to make my point. These are not all of the problems in the book.

Read the review to see all of the examples.

The second is Designing BSD Rootkits by Joseph Hong. From the review:

I loved Designing BSD Rootkits (DBR) by Joseph Kong, and I'm not even a kernel hacker. Rather, I'm an incident responder and FreeBSD administrator. This book is directly on target and does not waste the reader's time. If you understand C and want to learn how to manipulate the FreeBSD kernel, Designing BSD Rootkits is for you. Peer into the depths of a powerful operating system and bend it to your will!

DBR covers much of the same sorts of material found in the earlier Rootkits: Subverting the Windows Kernel by Greg Hoglund and James Butler, except Kong's book is all about FreeBSD. I actually read the Windows text first, but found Kong's more direct language and examples easier than the Hoglund/Butler text. After reading DBR I have a stronger understanding of each of the main chapters' techniques, i.e., kernel modules, hooking, direct kernel object manipulation, kernel object hooking, run-time kernel memory patching, and detection mechanisms. I particularly liked the author showing his sample rootkit's effectiveness against Tripwire, simply to demonstrate his methods. 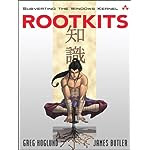 The third is Rootkits: Subverting the Windows Kernel by Greg Hoglund and Jamie Butler. From the review:

I read Rootkits: Subverting the Windows Kernel last year, but waited until I read Joseph Kong's Designing BSD Rootkits before reviewing both books. In a head-to-head comparison, I thought Kong's book was easier to comprehend and directly covered the key techniques I wanted to see. If I could give this book 4 1/2 stars I would, but Amazon doesn't allow that luxury.

Hoglund and Butler should be commended for writing this book. It really does assemble the parts (meaning techniques and code) necessary to implement a Windows rootkit, at least prior to Windows Vista. My only concern is that, at times, the authors are not as clear as I hoped they might be. This is probably due to the fact that they are two of the best rootkit writers on the planet, so they probably do not remember what it was like to not understand "hooking" and other techniques.

Thank you to No Starch and Addison-Wesley for the review copies.
freebsd reviews

Anonymous said…
Thank you Richard for the open and honest reviews of these books. I really appreciate people like you who not only provide honest reviews, but also point out why you have given such a rating.
8:40 AM

Anonymous said…
Richard thanks for the book reviews. I have been looking to purchase a few of these myself. I like your blog. It is very informative. Keep up the good work.
11:30 PM

Anonymous said…
I looked at PPA briefly while at Borders the other day and I totally echo the review given here. I was disappointed in the book since the title should have been "PPA for Noobs" or something like that.

Anonymous said…
This comment has been removed by a blog administrator.
6:51 AM