Inside a Congressional Hearing on Digital Threats 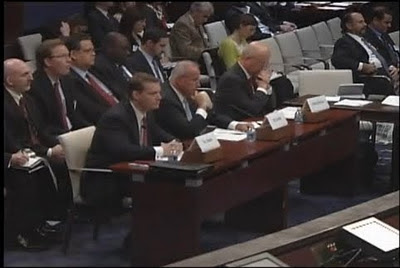 Today I was fortunate to attend a hearing of the US House Permanent Select Committee on Intelligence (HPSCI). That's me on the far left of the photo, seated behind our MANDIANT CEO Kevin Mandia. I'd like to share a few thoughts on the experience.

First, I was impressed by the attitudes of all those involved with HPSCI, from the staffers to the Representatives themselves. They were all courteous and wanted to hear the opinions of Kevin and the other two witnesses (Art Coviello from RSA and Michael Hayden from the Chertoff Group), whether before, during, or after the hearing.

"I don't believe that there is a precedent in history for such a massive and sustained intelligence effort by a government to blatantly steal commercial data and intellectual property...

China's economic espionage has reached an intolerable level and I believe that the United States and our allies in Europe and Asia have an obligation to confront Beijing and demand that they put a stop to this piracy."

You can watch all of Rep Rogers' statement on YouTube as Rep. Mike Rogers criticizes Chinese economic cyber-espionage (currently 21 views -- let's increase that!)

"As a professional intelligence officer, I step back in awe of the breadth, the depth, the sophistication, the persistence of the Chinese espionage effort against the United States of America." 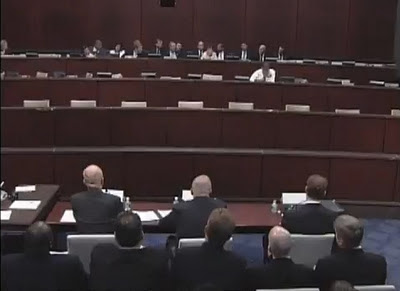 Third, I was very pleased that this hearing was conducted in an open forum, and not behind closed doors. While I haven't found the whole hearing online or on TV yet (aside from Rep Rogers' statement and that of Rep Myrick (R-NC)), I encourage as much discussion as possible about this issue.

One of General Hayden's points was that we are not having a debate about how to address digital threats because no one agrees what the facts are. If you work counter-intrusion operations every day, or participate in the intelligence community, you know what's happening. Outside that world, you likely think "APT" and the like are false concepts. We can really only build a national approach to countering the threat if enough people know what is happening.

Anonymous said…
Here's the link to the full hearing on C-SPAN: