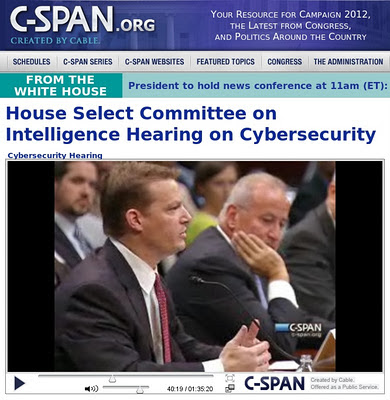 You can now access video of Tuesday's House Select Committee on Intelligence Hearing on Cybersecurity at C-SPAN.

Some people are already asking "what's new" about this. For me, what's new is that the chairman of the HPSCI is pointing his finger straight at the threat, and letting the world know in an open hearing that the adversary's actions are unacceptable and will not be tolerated. This is exactly the sort of attention and action that the threat deserves and I applaud the Chairman and HPSCI for pursuing this course.

Remember that the HPSCI is more likely to hold closed hearings than open hearings due to the nature of its classified intelligence oversight work. By conducting an open hearing, Chairman Rogers wanted to send a clear message to victims, the public, and the adversary.
Tweet
apt china