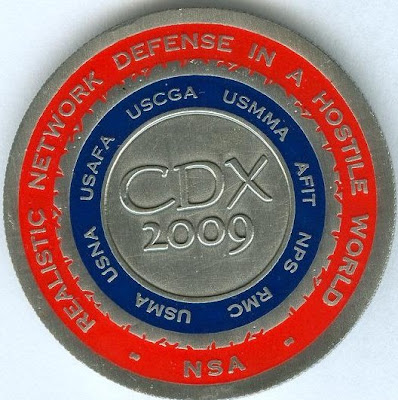 In my post Thoughts on 2009 CDX I described my initial reaction to the Cyber Defense Exercise from the point of view of seeing the white and red cells in action. Thanks to this press release I learned the outcome of the event:

The National Security Agency/Central Security Service (NSA/CSS) is pleased to announce that the United States Military Academy at West Point has won the 2009 Cyber Defense Exercise (CDX) trophy for the third year in a row.

The USMA team won the exercise for the third year in a row––West Point’s fifth win since the competition began in 2001. That means they successfully fended off the NSA hackers better than the U.S. Naval Academy, U.S. Air Force Academy, U.S. Coast Guard Academy, U.S. Merchant Marine Academy, the Naval Postgraduate School, the Air Force Institute of Technology and Royal Military College of Canada...

"We had large attacks against our e-mail and Web server from multiple (Internet protocol) addresses (all NSA Red Team), Firstie Josh Ewing, cadet public affairs officer for the team, said. "We were able to withstand their attacks and blocked over 200 IPs that they were using to attack the network."

All the while, the cadets were tasked with extra projects such as network forensics. The cadets’ scores from these extra tasks contributed to their win, Adams said.

Based on my discussions with people from the exercise, it is clear that West Point takes the CDX very seriously. As in previous years, West Point dedicated 30-40 cadets to the event. They appear to use the CDX as a capstone exercise for a computer security class. Based on manpower alone they dwarf the other participants; for example, the Coast Guard had a team of less than 10 (6-7?) from what I heard.

Thinking about this exercise caused me to try classifying the various stages through which a security team might evolve.

You may find these labels apply to your security teams too.