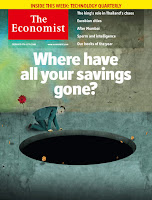 I've been a subscriber of the Economist magazine since 1997. Although I have not been working to achieve this goal, I am happy to report that a personal ambition of mine has been reached today: I was cited in the 6 Dec 08 edition, in an article titled Cyberwarfare: Marching off to cyberwar.

One way for governments to do this [to become resilient to cyber attack], says Richard Bejtlich, a former digital-security officer with the United States Air Force who now works at GE, an American conglomerate, might be to make greater use of open-source software, the underlying source code of which is available to anyone to inspect and improve. To those outside the field of computer security, and particularly to government types, the idea that such software can be more secure than code that is kept under lock and key can be difficult to accept. But from web-browsers to operating systems to encryption algorithms, the more people can scrutinise a piece of code, the more likely it is that its weak spots will be found and fixed. It may be that open-source defence is the best preparation for open-source attack.

Thank you to Evgeny Morozov for including my comment and to the Economist editors for not cutting it.

Richard Bejtlich is teaching new classes in DC and Europe in 2009. Register by 1 Jan and 1 Feb, respectively, for the best rates.
cyberwar topcan

I read the Economist every week to pass the time on airplanes, and although I wouldn't characterize their technology coverage as especially deep or thorough, it is good to see that they are using credible sources in their reporting.
7:58 PM

Anonymous said…
I wonder how many of their subscribers are unaware that General Electric is "an American conglomerate"?
12:13 AM

Anonymous said…
Congratulations, Rich. That's quite the compliment. Keep it up!
8:54 PM

Anonymous said…
Three of my favourite bloggers in one article. Rich Bejtlich, Thomas Barnett and John Robb.!
4:37 AM