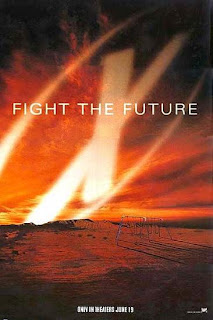 Digital security practitioners should fight today's battles while preparing for the future. I don't know what that future looks like, and neither does anyone else. However, I'd like to capture a few thoughts here. This is a mix of what I think will happen, plus what I would like to see happen. If I'm lucky (or good) the future will reflect these factors, for which I am planning.

A few caveats: I don't have an absolute time factor for these, and I'm not considering these my "predictions for 2009." This is not an endorsement of the Jericho Forum. I think it makes sense to plan for the environment I will describe next because it will be financially attractive, but not necessarily universally security-enhancing (or even smart).

I called this post "don't fight the future" because I think these developments will transpire. The model they represent is financially more attractive to people who don't put security first, which is every decision maker I've met. This isn't necessarily a bad thing, but it does mean we security practitioners should be making plans for this new world.

Richard Bejtlich is teaching new classes in DC and Europe in 2009. Register by 1 Jan and 1 Feb, respectively, for the best rates.
ipv6 topcan visibility

Anonymous said…
End-to-end connectivity might be just a mean to build secure overlay networks. That's the idea behind Mobile IPv6 for instance, and merely an other way of thinking your "perimeter". Because deperimeterization is nothing more than switching from a physical perimeter to a logical one.

yoshi said…
1. "VPNs" aren't going anywhere. They are evolving. IPSec is going away (and none too soon in my book) and being replaced with SSL vpns or similar approaches.

3. False. Companies are segmenting their networks into risk categories not the reverse. (heck I am doing a job for a major organization right now around this)

4. True sort of. Companies are determining what applications have different risks profiles. A well design app with low risk will be able to do more within the organization that a higher risk application. And incentives are being offered to business groups to design 'secure' apps and follow policy.

6. Been advocating this for as long as I've been in this business but organizations are notoriously bad at implementing it.

7. Most organizations are already doing this.
8:59 AM

Matt said…
1-3 just won't happen. Security policies won't allow it. There's absolutely no reason that the internet should be able to know the addressing scheme on my internal, private, secured network. In a security environment where leaking an internal path in the webserver is considered a bad thing, allowing the whole world to know your internal structure is unimaginable. And as Yoshi said, VPNs aren't going anywhere.

#5 is ridiculous. It's architecturally a step backwards. Managing individual devices in a world where every lightbulb has it's own IP is...counterintuitive at best.

6-7 are in the process of happening now. I'm seeing more status agents for reporting back to the centralized monitoring server, and bandwidth is never decreasing.
9:19 AM

Anonymous said…
This comment has been removed by a blog administrator.
3:00 AM

Anonymous said…
This comment has been removed by a blog administrator.
3:52 AM