The Best Single Day Class Ever

I had the great fortune to attend Edward Tufte's one day class Presenting Data and Information. I only knew Tufte from advertisements in the Economist. For example, the image at left was frequently used as an ad in the print magazine. I had not read any of his books although I knew of his criticism of PowerPoint, specifically with respect to the Challenger disaster.

This was the best one day class I have ever taken. It profoundly altered the way I think about presenting information and making arguments. If any part of your professional life involves delivering presentations, you must attend this class. It's a complete bargain for the price. I would like to see every professional at my company take this course. Following Tufte's advice would provide the single biggest productivity improvement and corresponding "return on investment" we are likely to see in my tenure.

There is no way for me to summarize Tufte's course. You should attend yourself, and read the four (!) textbooks he provides. I will try to capture points which made an impact upon me.

Substance, not Structure: When delivering a presentation, do whatever it takes to make your point. Be substance-driven, not method-driven. This means you determine what information you need to convey, not what you should put into PowerPoint. This really impressed me. PowerPoint is the currency for just about every presentation, conference, or other public event I attend. Imagine if we approached every event by deciding what effect we want to have upon the audience, instead of what slides we should create? Tufte stressed the power of sentences, saying sentences have "agency" but PowerPoint bullets do not. Sentences are tougher to write because they have nouns, verbs, and objects; bullets may have all, some, or none of those. PowerPoint also cripples arguments by stacking information in time and relying on the audience's short term memory. Instead, information should be arrayed in space, with as much spread out at once. The latter approach capitalizes on the human eye's "bandwidth of 80 Mbps per eye."

Credibility: Tufte emphasized that detail builds credibility, and audiences are constantly assessing the credibility of the speaker. Everything that can be documented and referenced and sourced should be; this resonated with my history degree. Every item of information should be communicative and should provide reasons to believe the speaker. Credibility arises from delivering an argument backed by evidence, and that material can be believed until an alternative explanation for the evidence, with as much rigor as the first explanation, appears. Speakers expand their credibility by explicitly addressing alternative explanations, rather than avoiding them. 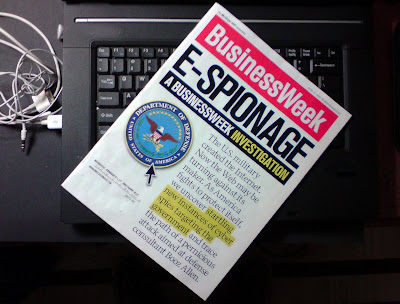 Making an Impact: Too many of us exist in "flatland," i.e., the world of the computer screen, paper, and related media. To grab your audience's attention, bring something real from the 3D world to your presentation. This resonated with me too. At a recent week-long class for work with 42 other managers, I was told that some of the people in the class remembered me long after my initial introduction because I had a prop. The BusinessWeek magazine on "e-spionage" was on a table near me, so I told the class "I do this."

Image ref: Writing is About Putting Yourself to Words.

Presentation Design: Tufte advocates using what a colleague of mine calls a "placemat" format for delivering information. Tufte calls it a "tech report." Rather than standing in front of a PowerPoint slide deck, create a two-sided, 11" X 17" handout for the audience. Copy a format you've seen elsewhere. Pay attention to the pros; Tufte recommends Nature magazine for elite scientific and technical reporting or the New York Times for non-technical reporting. Include what Tufte calls a "supergraphic," an image that captures the audience's attention, like a highly detailed aerial photograph. (Whatever it is, ensure it is relevant to the audience!) He likes Gil Sans font. Include data on performance. There is no such thing as "information overload," only bad design. To clarify add detail -- don't remove it.

PowerPoint: PowerPoint only helps the bottom ten percent of speakers who would have no idea what to say without it. PowerPoint doesn't hinder the top ten percent of speakers who probably ignore their slides. PowerPoint devastates the middle 80 percent of speakers who think they are delivering information, when really they are (unconsciously) treating the audience as if they are too stupid to digest information in any other format. People can read 2-3 times faster than they can speak, so why should a presenter waste so much time with bullet points? Presentations should be a "high resolution data dump" (like a paper) and not a "press conference." Provide information in problem -> relevance -> solution format with a paragraph for each, with images, tables, "sparklines," and such integrated. You may use PowerPoint as a "projector operating system" ("POS," get it, get it?) to display tables, movies, or other media as necessary, but not as a bullet delivery tool.

Image ref: Presentation Zen: Contrasts in presentation style: Yoda vs. Darth Vader. Note the bullets are sentences, so they are actually more content-oriented than the usual PowerPoint bullets!

That's it for me. If you look a little you'll find other people's coverage of these training classes, like Colliers Atlas Blog or 21Apples.

What does this mean for me? I recently taught a one-day class on Network Security Operations. I decided to print the entire slide deck I've used for the last few years, suitable for a two or three day class. I decided to use that material solely as a reference, like Tufte uses his text books in his own classes. I asked the students what problems they were trying to solve in their own enterprises. Then I selected themes and spoke to them, using some of my slides as background or reference. I am trying to decide how to integrate this approach into my upcoming TCP/IP Weapons School class at Black Hat, which is mostly an examination of packet traces using Wireshark. I don't rely on slides for it.
powerpoint topcan tufte

Unknown said…
Its a damm good course, does he still give out his books as part of the course? If you don't have all of them it is money well spent.

Anonymous said…
So you do have a degree in History. Great. There are so few historian in tech, it's good to meet one from time to time.

I loved Tufte when I first read him. Now if he would only hold classes in Europe.
5:52 AM

John Ward said…
I remember reading about him a few years ago, but didn't pay it much mind. Now that someone I know has gone through his course and has a good deal to say about it, especially someone respectable, not just another suit, I will consider taking the course, especially since a large part of my job is presenting :)
11:11 AM

Anonymous said…
By "sentences" I believe Tufte meant a quote along with a picture in a slide.

Presentation Zen's use of Vader's sentences in bullet-style is just the worst of both words. In other words -- if you're going to do bullets, they shouldn't be sentences.

I prefer to see slide decks that are 99 percent pictures.
8:14 AM

Anonymous said…
I wholeheartedly concur with your assessment of Tufte and his course.

He's flat out one of the greatest speakers I've ever seen - for anyone who remembers falling asleep through every lecture at University, it's amazing to see someone with presentation skills that keep you focused for an entire day.

I'd really like to see his "Cognitive Style of Powerpoint" pamphlet sent to the speakers at any conference. As fascinating as the underlying material may be, I start to go insane after a day or two of conferences that are non-stop, "death by Powerpoint" (Blackhat followed by Defcon followed by USENIX last year was particularly rough).
10:38 AM

Ivan Ristić said…
Ironically, I fall asleep every time I try to read one of Tufte's books: