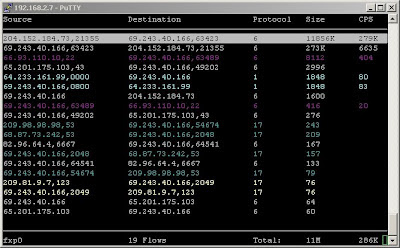 Trafshow is a ncurses-based program that shows a snapshot of active network sessions in near real time. I like to use it with OpenSSH sessions on sensors to get a quick look at hosts that might be hogging bandwidth. Recently Trafshow 5 became available in the FreeBSD ports tree (net/trafshow), so I have started using it.

When I showed it in class last week, I realized I did not recognize the color scheme depicted in the screen shot above. I learned that the configuration file /usr/local/etc/trafshow controls these colors:

As you can see in the screen shot, we have SSH, WHOIS, ICMP, DNS, IRC, and NTP active.

A quick look at Argus data from yesterday (when I took this screenshot) reveals that the port 43 TCP traffic was the only conversation between those two hosts:

This indicates to me that the records without port data are related to those with port data, because in this second case only one session involved both IPs.

I will contract Trafshow's author to gain confirmation.

One aspect of the new Trafshow I do not like is the way it opens a port to listen for NetFlow records:

To disable this NetFlow collector function, invoke Trafshow with the '-u 0' option.