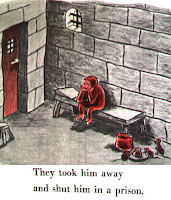 In late 2007 I blogged Max Ray Butler in Trouble Again. Please see that post and Kevin Poulsen's June 2009 story for details. According to ComputerWorld, you don't want to be Max Ray Butler:

A former security researcher turned criminal hacker has been sentenced to 13 years in federal prison for hacking into financial institutions and stealing credit card account numbers.

Max Ray Butler, who used the hacker pseudonym Iceman, was sentenced Friday morning in U.S. District Court in Pittsburgh on charges of wire fraud and identity theft. In addition to his 13-year sentence, Butler will face five years of supervised release and must pay US$27.5 million in restitution to his victims, according to Assistant U.S. Attorney Luke Dembosky, who prosecuted the case for the federal government.

Dembosky believes the 13 year sentence is the longest-ever handed down for hacking charges.

Unknown said…
Funny you should post that picture. I have read that Curious George story to my son almost every night for 2 months straight. Maybe Butler can do what George did:

Hit the guard over the head with the bench, run to the roof, climb over the yard on some wires, and grab a handful of ballons from a vendor to make good his escape. Or not...
12:13 PM

Anonymous said…
Yeah, big yellow vendor balloons! I know which vendor that would be ;)
8:21 PM