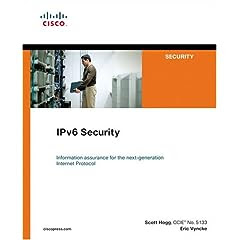 Amazon.com just posted my five-star review of IPv6 Security by Scott Hogg and Eric Vyncke. From the review:

I've read and reviewed three other books on IPv6 in the last four years: IPv6 Essentials, 2nd Ed (IE2E) in September 2006, Running IPv6 (RI) in January 2006, and IPv6 Network Administration (INA) in August 2005. All three were five-star books, but they lacked the sort of attention to security that I hoped would be covered one day. IPv6 Security by Scott Hogg and Eric Vyncke is the book for which we have been waiting. Although some of the early "philosophical" security discussions (what's a threat, where are they) are lacking, the overwhelming amount of thorough and actionable content makes this book a winner.
ipv6 reviews

Anonymous said…
This comment has been removed by a blog administrator.
8:56 AM

I too enjoyed all three books.