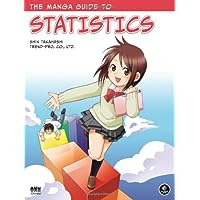 I took statistics classes twice in undergrad (once during the normal school year, a second time during a summer program at another school), and once during my master's program. That was so long ago that I don't remember a lot of what I had to learn. Recently review copies of two books arrived, namely The Manga Guide to Statistics by Shin Takahashi and Trend-pro Co., Ltd and Statistics in a Nutshell by Sarah Boslaugh and Dr. Paul A. Watters.

Both books claim to be the right book to introduce newbies to statistics. You can guess which one does a better job just by looking at the covers. Here's a hint: consider the words "a desktop quick reference" on the O'Reilly title to be false advertising. Too many of the so-called "Nutshell" books published by O'Reilly today are nothing of the sort. They are not like my beloved Unix in a Nutshell, 3rd Ed that helped me navigate the Solaris 7 command line in 1999. No, these days too many "Nutshell" books are just regular titles crammed into the Nutshell form factor. 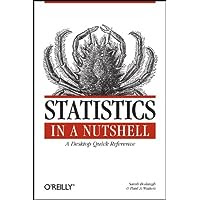 I think Statistics in a Nutshell should be called "A Guide to Applying Statistics Properly." That would indicate the book's real goal, which is to guide researchers in the realms of data management, research design, and critiquing statistics -- all subjects given their own chapters.

In contrast, The Manga Guide to Statistics is a great introduction for anyone who wants to learn statistics. I admit, I was a little skeptical at first. I don't read manga and any comic books I still own from the 1980s are sealed in their plastic bags, thank you very much. However, I found the approach in the Manga Guide to be compelling and informative. It seems to make a difference when the teacher in the Manga Guide has to "answer" questions posed by a student, and not just speak to readers in the abstract. The Manga Guide also built all of its examples on real life situations, which made the material easier to understand.

As mentioned in a review I saw, the Manga Guide seems to be the perfect book for students in middle school or higher to learn statistics. As a bonus, the Manga Guide includes exercises using Excel, which is much easier than the applications I had to manipulate in the early 1990s. I congratulate No Starch for bringing such an innovative teaching tool to our bookshelves. Check out their entire Manga series for other titles.

V I R O X said…
This comment has been removed by a blog administrator.
5:11 AM

John Ward said…
Great series, I totally forgot about it since I haven't been to a book store in a while. Thanks Rich.
12:19 PM

dwaynedibbly said…
I also enjoyed Statistics Hacks by Bruce Frey. It's a bit carelessly edited but otherwise an entertaining read.
6:14 AM

Unknown said…
We're offering a deal on purchases of the entire set.
12:46 AM