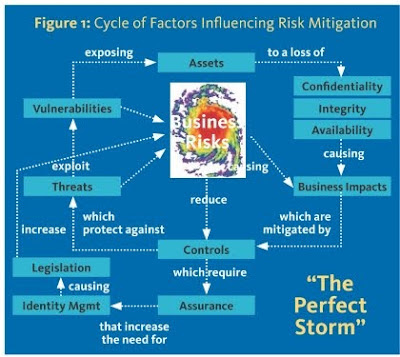 The image at left is from the first issue of an Intel marketing magazine called Premier IT. I like it because it shows many of the terms I try to describe in this blog, in relationship to each other. In English, the graphic says something like the following:

I disagree that business impact is mitigated by controls. I think those terms were connected to make a pretty cyclical diagram. I would also say that controls mitigate attacks (exploits) by threats, not the threats themselves. Imprisonment mitigates threats. 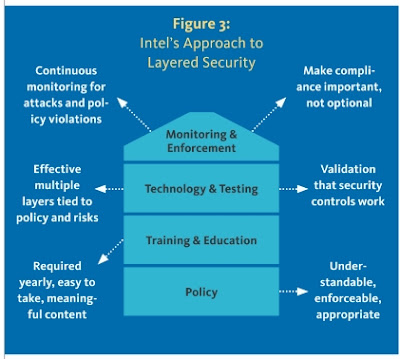 The next diagram shows Intel emphasizes Policy at the base, followed by Training and Education, then Technology and Testing, and finally Monitoring and Enforcement. I think the Training and Education piece is marginally effective at best, at least for the general user population. It's tough enough for security pros to keep up with the latest attacks. It's impossible for general users. The school of hard knocks (i.e., experience) is doing a better job teaching the general user population not to trust anything online. I like the recommendation for Continuous monitoring for attacks and policy violations. 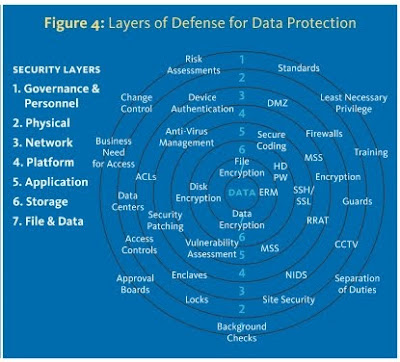 The last diagram positions most of the components of digital security within context. It includes Governance and Personnel, Physical Security, Network Security, Platform Security, Application Security, Storage Security, and File and Data Security. I like this image because it makes me question what aspects of this environment I understand and can personally implement.
risk threats vulnerabilities

igfire said…
This comment has been removed by a blog administrator.
12:42 AM

Anonymous said…
This comment has been removed by a blog administrator.
7:09 AM