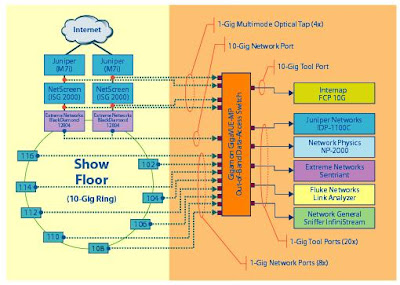 Today while perusing Webcasts at Gigamon University, I listened to a Gigamon presentation on a "data access network" (so-called "DAN") built as the Interop SpyNet, shown earlier. 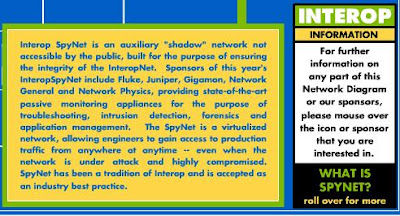 This is exactly an implementation of PNA. The Interop network and security admins can monitor the InteropNet and see traffic anywhere they like. This Interop Blog post provides a portal into discussions of the SpyNet, including history showing the idea stretches back to 1996. This shows that PNA is a good idea, and like many good ideas, not even new!

At some point I would like to see a SpyNet in person. I will be in Australia for Interop Las Vegas, but I will look into visiting New York in October.

It would be nice to see this approach built into all networks. I believe the reason it is not is that the InteropNet is a clean slate each year. If you're allowed to build a network from scratch using the latest and greatest tools and techniques, then you can see developments like this in action. Networks that have grown "organically" over a decade are likely to have plenty of dark streets and dangerous alleys where monitoring is dicey or impossible.

Update: I should mention that I dislike the term "data access network" (DAN). What could be more generic? What they should have said was "traffic access network" (TAN). Now we're describing the nature of the solution.
nsm tools

Anonymous said…
This comment has been removed by a blog administrator.
7:33 AM