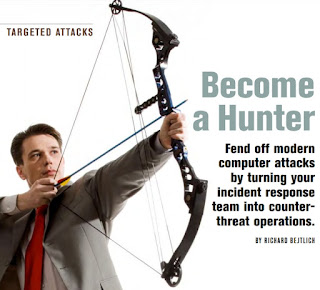 Where would you place your security researchers/hunt team?

This inspired Rob Lee to blog a response, from which I extract his core argument:

[Hunting] really isn’t, to me, about detecting threats...

Hunting is a hypothesis-led approach to testing your environment for threats. The purpose, to me, is not in finding threats but in determining what gaps you have in your ability to detect and respond to them...

In short, hunting, to me, is a way to assess your security (people, process, and technology) against threats while extending your automation footprint to better be prepared in the future. Or simply stated, it’s incident response without the incident that’s done with a purpose and contributes something.

As background for my answer, I recommend my March 2017 post The Origin of Threat Hunting, which cites my article "Become a Hunter," published in the July-August 2011 issue of Information Security Magazine. I wrote it in the spring of 2011, when I was director of incident response for GE-CIRT.

For the term "hunting," I give credit to briefers from the Air Force and NSA who, in the mid-2000s briefed "hunter-killer" missions to the Red Team/Blue Team Symposium at the Johns Hopkins University Applied Physics Lab in Laurel, MD.

As a comment to that post, Tony Sager, who ran NSA VAO at the time I was briefed at ReBl, described hunting thus:

[Hunting] was an active and sustained search for Attackers...

For us, "Hunt" meant a very planned and sustained search, taking advantage of the existing infrastructure of Red/Blue Teams and COMSEC Monitoring, as well as intelligence information to guide the search.

For the practice of hunting, as I experienced it, I give credit to our GE-CIRT incident handlers -- David Bianco,  Ken Bradley, Tim Crothers, Tyler Hudak, Bamm Visscher, and Aaron Wade -- who took junior analysts on "hunting trips," starting in 2008-2009.

It is very clear, to me, that hunting has always been associated with detecting an adversary, not "determining what gaps you have in your ability to detect and respond to them," as characterized by Rob.

For me, Rob is describing the job of an enterprise visibility architect, which I described in a 2007 post:

[W]e are stuck with numerous platforms, operating systems, applications, and data (POAD) for which we have zero visibility.

I suggest that enterprises consider hiring or assigning a new role -- Enterprise Visibility Architect. The role of the EVA is to identify visibility deficiencies in existing and future POAD and design solutions to instrument these resources.

A primary reason to hire an enterprise visibility architect is to build visibility in, which I described in several posts, including this one from 2009 titled Build Visibility In. As a proponent of the "monitor first" school, I will always agree that it is important to identify and address visibility gaps.

So where do we go from here?

Tony Sager, as one of my wise men, offers sage advice at the conclusion of his comment:

"Hunt" emerged as part of a unifying mission model for my Group in the Information Assurance Directorate at NSA (the defensive mission) in the mid-late 2000's. But it was also a way to unify the relationship between IA and the SIGINT mission - intelligence as the driver for Hunting. The marketplace, of course, has now brought its own meaning to the term, but I just wanted to share some history.

In my younger days I might have expressed much more energy and emotion when encountering a different viewpoint. At this point in my career, I'm more comfortable with other points of view, so long as they do not result in harm, or a waste of my taxpayer dollars, or other clearly negative consequences. I also appreciate the kind words Rob offered toward my point of view.

tl;dr I believe the definition and practice of hunting has always been tied to adversaries, and that Rob describes the work of an enterprise visibility architect when he focuses on visibility gaps rather than adversary activity.

Update 1: If in the course of conducting a hunt you identify a visibility or resistance deficiency, that is indeed beneficial. The benefit, however, is derivative. You hunt to find adversaries. Identifying gaps is secondary although welcome.

The same would be true of hunting and discovering misconfigured systems, or previously unidentified assets, or unpatched software, or any of the other myriad facts on the ground that manifest when one applies Clausewitz's directed telescope towards their computing environment.
hunting philosophy topcan visibility