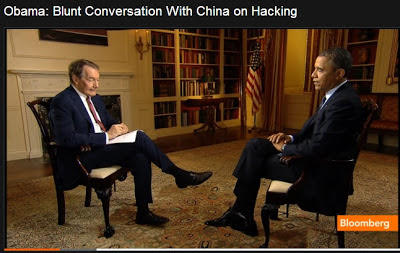 I strongly recommend watching the excerpt on the Charlie Rose show titled Obama: Blunt Conversation With China on Hacking. I reproduced the relevant part of the transcript below and added emphasis to key points.

CHARLIE ROSE: Speaking of pushing back, what happened when you pushed back on the question of hacking and serious allegations that come from this country that believe that the Chinese are making serious strides and hacking not only private sector but public sector?

BARACK OBAMA: We had a very blunt conversation about cyber security.

CHARLIE ROSE: Do they acknowledge it?

BARACK OBAMA: You know, when you’re having a conversation like this I don’t think you ever expect a Chinese leader to say "You know what? You’re right. You caught us red-handed."

CHARLIE ROSE: You got me. Yes.

BARACK OBAMA: We’re just stealing all your stuff and every day we try to figure out how we can get into Apple --

CHARLIE ROSE: And may be talking to the Chinese.

BARACK OBAMA: Well, let’s separate out the NSA issue which I’m sure you’re going to want to talk to and the whole full balance of privacy and security with -- with the specific issue of cyber security and our concerns --

BARACK OBAMA: Right. Every country in the world, large and small, engages in intelligence gathering and that is an occasional source of tension but is generally practiced within bounds. There is a big difference between China wanting to figure out how can they find out what my talking points are when I’m meeting with the Japanese which is standard fare and we’ve tried to prevent them from --

BARACK OBAMA: -- penetrating that and they try to get that information. There’s a big difference between that and a hacker directly connected with the Chinese government or the Chinese military breaking into Apple’s software systems to see if they can obtain the designs for the latest Apple product. That’s theft. And we can’t tolerate that.

And so we’ve had very blunt conversations about this. They understand, I think, that this can adversely affect the fundamentals of the U.S./China relationship. We don’t consider this a side note in our conversations. We think this is central in part because our economic relationship is going to continue to be premised on the fact that the United States is the world’s innovator. We have the greatest R&D. We have the greatest entrepreneurial culture.

Our value added is at the top of the value chain and if countries like China are stealing that that affects our long-term prosperity in a serious way.

This is an amazing development for someone aware of the history of this issue. President Obama is exactly right concerning the differences between espionage, practiced by all nations since the beginning of time, and massive industrial theft by China against the developed world, which the United States, at least, will not tolerate. I am so pleased that this issue is at the top of the agenda between the US and China and that the President and his team, as well as Congress, are taking it so seriously.

It's more of technology stealing activity, looking at how good China is into reverse engineering, and if they can obtain the data, they will be able to rebuild the same thing, that basically saves a lot of time and money needed to be spent on R&D, and quickly go into mass production and money making.