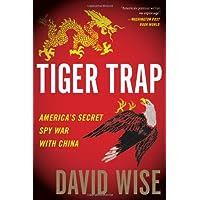 I just finished reading Tiger Trap by David Wise. I read the whole book (so my "impressions" label isn't really accurate, because I use that for books I didn't fully read). I don't feel like writing an entire review but I wanted to capture a few thoughts.

First, if you know nothing about Chinese espionage against the United States, read Tiger Trap. I didn't think Tiger Trap was the easiest book to read about the subject, but I haven't seen any other source cover so much history in one volume.

Third, the Chinese like to "get good people to do bad things," as I Tweeted last week (citing page 16). In other words, China appeals to its overseas ethnic community to steal information because China "is a poor country," and it "needs to develop." (Oddly enough I have read these exact words in articles by various people who brush off reports of espionage.) While some spies act out of greed or revenge or a need to feel important, it seems plenty of other spies think they are really doing the right thing, leveling the playing field, or even helping both sides!

If anyone can provide the names of other resources describing Chinese espionage, I would appreciate the comment.
Tweet
china impressions

Bill Gertz, The China Threat. And his: Enemies: How America's Foes Steal Our Vital Secrets...
1:58 AM

Anonymous said…
Not 100% sure China is the actor but motive was present : http://www.scribd.com/doc/13731776/Tracking-GhostNet-Investigating-a-Cyber-Espionage-Network
7:04 AM

Anonymous said…
Nest of Spies is about foreign operatives operating in Canada, which is apparently quite common since the government has their heads in the sand. This book may complement Tiger Trap because it talks a lot about Chinese activity. It discusses Chinese patience, such as planting people out of college and then calling on them decades later when they have climbed the ranks, and the concept of "soft influence" to position themselves to benefit in subtle ways. They will also file away anything they can get their hands on for future reference, no matter how innocuous. Also mentioned is the pressure they place on transplanted immigrants to spy, and the risks to travelers to China doing business with that country.

This book was withdrawn from the market due to alleged complaints by the Chinese government and the second ed. had about a page removed.


At one time this Canadian book was only available at the Canadian Amazon, but you may want to pick up a used copy since one can now get an inexpensive used copy on the US side. Strangely enough, all the descriptive text has disappeared.