Papers Not PowerPoint, Plus Tips for Improvement

Recently I railed against PowerPoint. In this post I'd like to congratulate Black Hat and some of their Briefings speakers for submitting white papers, not just PowerPoint presentations.

This evening while cleaning out a tmp directory I noticed a copy of a white paper by IBM's Tom Cross from Black Hat DC 2010 titled Exploiting Lawful Intercept to Wiretap the Internet. The paper describes Tom's analysis of Cisco's implementation of CALEA for law enforcement-directed wiretaps. The paper is 18 pages, but the last 3 are basically citations. It's a great piece of work which I wish I had read earlier.

For me, this paper emphasized how much of a failure it is to try to deliver complicated information in PowerPoint form. I got more out of taking 20 minutes to read Tom's 15 pages of material than I could have trying to make sense out of his 41 slides. Tom is a good writer whose paper delivers solid arguments. Rather than just praise the paper and slam the PowerPoint, I'd like to show how Tom did use PowerPoint well so that I keep these ideas in mind when I need to brief audiences.

A speaker I listened to earlier this week said you can't expect an audience to take away more than one point from any slide, so why bother? In fact, if you adapt the ideas of the great Tufte, you should use PowerPoint only as a delivery mechanism for charts, diagrams, and other visuals. 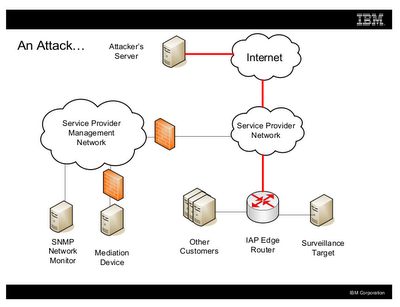 Using this approach, the figure at right which appears in Tom's PowerPoint deck for Black Hat is just the kind of material that should appear in a PowerPoint presentation. You could imagine this diagram being in a handout given to the audience, but during the briefing Tom would no doubt want to point towards specific elements of the diagram while the audience watched. This justifies displaying the figure via PowerPoint, because it is the most effective medium for communicating the information. 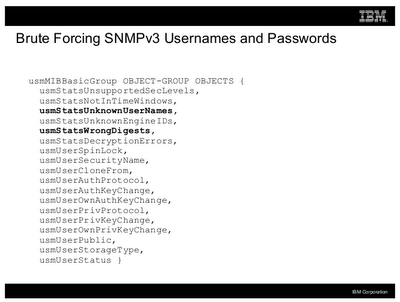 I think the SNMP MIB extract displayed at left, also from Tom's PowerPoint, is justified as appearing in a slide. Tom isn't asking the audience to pay attention to every line on the slide, like someone might expect an audience to do with a slide full of bullets. Rather, Tom has highlighted two important excerpts, showing them as proof that within this MIB there are two elements which expose information to attackers. This information could also appear on a handout given to the audience. However, here I like seeing the information to prove Tom's point. It's almost like a "technical figure" for me.

On a related point, I did not see any PowerPoint posted for HD Moore's talk Metasploit and Money. However, HD posted a great 9 page white paper, which is archived. I think I already mentioned via Twitter that I enjoyed this paper, and I wonder if no slides were presented?

To summarize, if you're presenting complicated material, slides are generally not an effective delivery mechanism. At best they can supplement a briefing by being a vehicle for displaying figures or other visuals, but bullets are generally a waste of time. For details why, please see my posts on PowerPoint.
philosophy powerpoint snmp tufte

Lance Spitzner said…
Richard, hope you don't mind a cross post, but I could not agree more about your points. To me a good presentation slide deck should primarily be images which demonstrate the concepts you are describing. I also found two alternative presentation methods which I blogged about last month.

Richard Bejtlich said…
Lance, thanks a ton for pointing me to Prezi.com. I may try it! Won't be able to see you at SANS in June though.
10:36 PM

There is/are a powerpoint addon(s) who can do the same as prezi.com. Look eg. for pptplex.
4:15 AM

I think a lot of us were thinking about the same topic at the same time. Here is a link to what I had to say over on my blog:

I have seen both the 3d timeline and the prezi method done poorly and wonderfully. The bottom line to any presentation is that you have to practice it before you give it. And I mean you should get a lot of practice.

The other method that I really like, and one that I try to use myself (at least a modified form of it) is the Andrew Lessig style.

A typical Lessig style 30 minute presentation is roughly 500 slides. I know, that sounds horrible, but each slide is a word or a phrase or a picture that the speaker rapidly presents to the audience. This style takes the most practice, but when done correctly, it is a beauty to behold.

Check out the examples in the above links.