I'm Surprised That Your Kung Fu Is So Expert 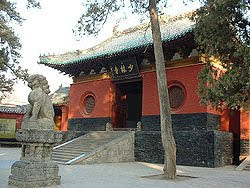 This story is so awesome.

A hacker who posted a fake message on the Web site of China's famous Shaolin Temple repenting for its commercial activities was just making a mean joke, the temple's abbot was cited as saying by Chinese state media Monday.

That and previous attacks on the Web site were spoofs making fun of the temple, Buddhism and the abbot himself, Shi Yongxin was cited as telling the People's Daily.

"We all know Shaolin Temple has kung fu," Shi was quoted as saying. "Now there is kung fu on the Internet too, we were hacked three times in a row."

Why am I not surprised that a Shaolin monk has a better grasp of the fundamentals of computer security than some people in IT?

Bonus: Props to anyone who recognizes the title of this post.
china threats

Jim Steele said…
This comment has been removed by the author.
3:50 PM

I'm partial to the Japanese martial art traditions, but I've studied one form of Kung-Fu as well. :) I do value "The Art of War", which is Chinese in origin. I think both the "Art of War" (Chinese) and "A Book of Five Rings" (Japanese) have much to offer Information Security.

Admittedly, my blog-fu isn't up to speed yet. :)

Crawley Martial Arts said…
Yup totally agree - I think I saw that mentioned on some Kung Fu mag (can't quite remember) and whilst all the shaolin monks were on their mobile phones when I was there this year - I'm not surprised that their martial arts expertise applies to cybercrime!
7:58 AM

Christopher C. Welber said…
Unfortunately I think many monks/masters/managers in the Buddhist communities [I'm a Tibetan Buddhist myself] are not really up security issues and the monetary and other types of damage which can be caused these days. It's rare to find a monk who is up on technology at all because that's not really their thing.

One day I want to build a Buddhist and Senior center myself and in general I think it would be great if technology professionals [I've been in the business for over 22 years] put together some sort of association to help these religious organizations, I would be happy to do this! And just because their large and well known does not mean their technology is advanced at all.
9:41 AM