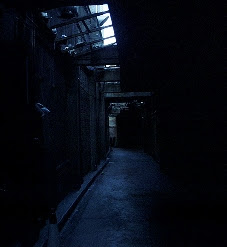 I wanted to bring a few threat-oriented stories to your attention if you hadn't seen them. I'm also recording them here because I abhor bookmarks.

It's important to remember that we're fighting people, not code. We can take away their sticks but they will find another to beat us senseless. An exploit or malware is a tool; a person is a threat.

Dark images like the alley on the right first described in Analog Security is Threat-Centric remind us how dangerous the Internet can be to our data, and potentially our lives.