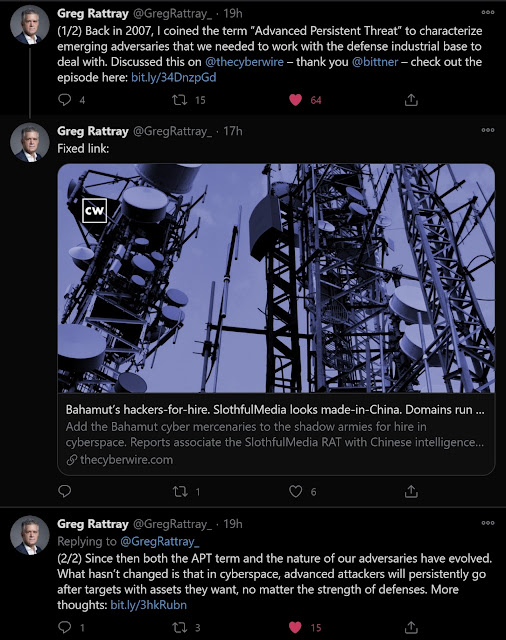 I was so pleased to read this Tweet yesterday from Greg Rattray:
"Back in 2007, I coined the term “Advanced Persistent Threat” to characterize emerging adversaries that we needed to work with the defense industrial base to deal with... Since then both the APT term and the nature of our adversaries have evolved. What hasn’t changed is that in cyberspace, advanced attackers will persistently go after targets with assets they want, no matter the strength of defenses."

First, some background. Who is Greg Rattray?
First, you could call him Colonel or Doctor. I will use Col as that was the last title I used with him, although these days when we chat I call him Greg.
Col Rattray served 21 years in the Air Force and also earned his PhD in international security from Tufts University. His thesis formed the content for his 2001 book Strategic Warfare in Cyberspace, which I reviewed in 2002 and rated 4 stars. (Ouch -- I was a bit stingy with the stars back then. I was more of an operator and less of a theorist or historian in those days. Such was my bias I suppose.)
Col Rattray is also a 1984 graduate of the Air Force Academy. He studied history and political science there and returned as an assistant professor in the early 1990s. He was one of my instructors when I was a cadet there. (I graduated in 1994 with degrees in history and political science.) Col Rattray then earned a master of public policy degree at Harvard Kennedy School. (I did the same, in 1996.)
Do you see a pattern here? He is clearly a role model. Of course, I did not stay in the Air Force as long, earn the same rank, or survive my PhD program!
After the Academy, Col Rattray served as commander of the 23rd Information Operations Squadrons on Security Hill in San Antonio, Texas. I was working in the AFCERT at the time.
One of the last duties I had in uniform was to travel to Nellis AFB outside Las Vegas and participate in a doctrine writing project for information warfare. At the time I was not a fan of the idea, but Col Rattray convinced me someone needed to write down how we did computer network defense in the AFCERT.
He didn't order me to participate, which I always appreciated. Years later I told him it was a good idea to organize that project and that I was probably just grumpy because of the way the Air Force personnel system had treated me at the end of my military career.

For years I've had to dance around the issue of who invented the term "APT." In most narratives I say that an Air Force colonel invented the term in 2006. I based this on discussions I had with colleagues in the defense industrial base who were working with said colonel and his team from the Air Force. I did not know back then that it was Col Rattray and his team from the Air Force Information Warfare Center.
Years later I learned of Rattray's role, but not directly from him. Only this year did Col Rattray confirm to me that he had invented the term, and that 2007 was the correct year. I encouraged him to say something, because as an historian I appreciate the value of facts and narrative. As I Tweeted after seeing Greg's Tweet:
"Security, like any other field, has HISTORY, which means there are beginnings, and stories, and discoveries, and innovators, and leaders, and first steps, and pioneers. I'm so pleased to see people like @GregRattray_ feel comfortable enough after all these years to say something."
I don't think many people in the security field think about history. Security tends to be obsessed with the "new" and the "shiny." Not enough people wonder how we got to this point, or what decisions led to the current situation. The security scene in 2020 is very different from the scene in 1960, or 1970, or 1980, or 1990, or 2000, or even 2010. This is not the time to describe how or why that is the case. I'm just glad a very important piece of the puzzle is now public.

More on the APT 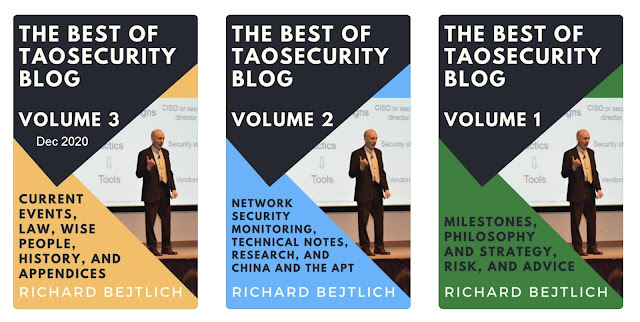 If you'd like to learn more about this history of the APT, check out my newest book -- The Best of TaoSecurity Blog, Volume 2. I devote an entire chapter to blog posts and new commentary on the APT. Volume 1 arrived a few months before this new book, and I'm working on Volume 3 now.
apt