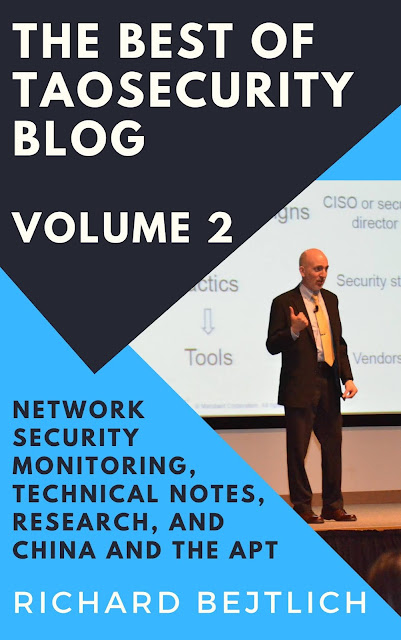 I published a new book!

It's in the Kindle Store, and if you're Unlimited it's free. Print edition to follow.

The book lists as having 413 pages (for the Kindle edition at least) at it's almost 95,000 words. I started working on it in June after finishing Volume 1.

Here is the book description:

Since 2003, cybersecurity author Richard Bejtlich has been writing posts on TaoSecurity Blog, a site with 15 million views since 2011. Now, after re-reading over 3,000 posts and approximately one million words, he has selected and republished the very best entries from 17 years of writing.

In the second volume of the TaoSecurity Blog series, Mr. Bejtlich addresses how to detect and respond to intrusions using third party threat intelligence sources, network data, application and infrastructure data, and endpoint data. He assesses government and private security initiatives and applies counterintelligence and counteradversary mindsets to defend digital assets. He documents the events of the last 20 years of Chinese hacking from the perspective of a defender on the front lines, in the pre- and post-APT era.

This volume contains some of Mr. Bejtlich’s favorite posts, such as histories of threat hunting, so-called black and white hat budgeting, attribution capabilities and limits, and rating information security incidents. He has written new commentaries to accompany each post, some of which would qualify as blog entries in their own right.  Read how the security industry, defensive methodologies, and strategies to improve national security have evolved in this new book, written by one of the authors who has seen it all and survived to blog about it.

I have a third volume planned. I will publish it by the end of the year. 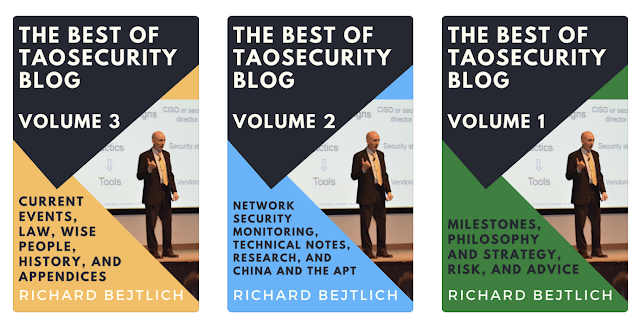 If you have any questions about the book, let me know. Currently you can see the table of contents via the "Look Inside" function, and there is a sample that lets you download and read some of the book. Enjoy!
books