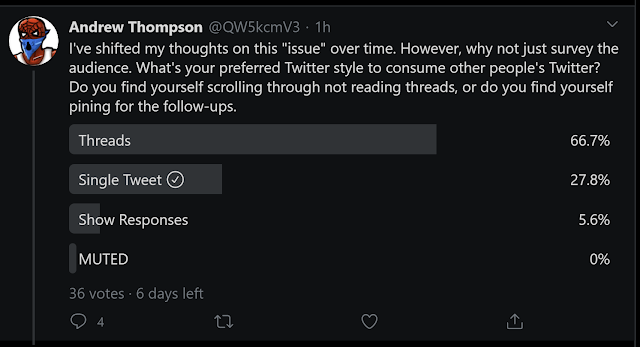 I saw my like-minded, friend-that-I've-never-met Andrew Thompson Tweet a poll, posted above.

I was about to reply with the following Tweet:

Then I realized I had something more to say, namely, other reasons blog posts are better than Tweets. For the briefest moment I considered adding a second Tweet, making, horror of horrors, a THREAD, and then I realized I would be breaking my own guidance.

Here are three reasons to consider blogging over Tweeting.

1. If you find yourself trying to pack your thoughts into a 280 character limit, then you should write a blog post. You might have a good idea, and instead of expressing it properly, you're falling into the trap of letting the medium define the message, aka the PowerPoint trap. I learned this from Edward Tufte: let the message define the medium, not the other way around.

2. Twitter threads lose the elegance and readability of the English language as our ancestors created it, for our benefit. They gave us structures, like sentences, lists, indentation, paragraphs, chapters, and so on. What does Twitter provide? 280 character chunks. Sure, you can apply feeble "1/n" annotations, but you've lost all that structure and readability, and for what?

3. In the event you're writing a Tweet thread that's really worth reading, writing it via Twitter virtually guarantees that it's lost to history. Twitter is an abomination for citation, search, and future reference. In the hierarchy of delivering content for current researchers and future generations, the hierarchy is the following, from lowest to highest:


Print book are the apex communication medium because we have such references going back hundreds of years. Hundreds of years from now, I doubt the first five formats above will be easily accessible, or accessible at all. However, in a library or personal collection somewhere, printed books will endure.

The bottom line is that if you think what you're writing is important enough to start a "1/n" Tweet thread, you've already demonstrated that Twitter is the wrong medium.


I understand the seduction of Twitter. I use it every day. However, when it really matters, blogging is preferable, followed by the other media I listed in point 3 above.

Update 0930 ET 27 Mar 2020: I forgot to mention that in extenuating circumstances, like live-Tweeting an emergency, Twitter threads on significant matters are fine because the urgency of the situation and the convenience or plain logistical limitations of the situation make Twitter indispensable. I'm less thrilled by live-Tweeting in conferences, although I'm guilty of it in the past. I'd prefer a thoughtful wrap-up post following the event, which I did a lot before Twitter became popular.
topcan