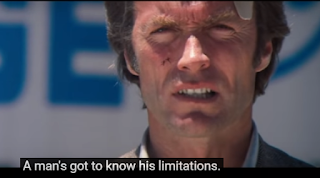 At the end of the 1973 Clint Eastwood movie Magnum Force, after Dirty Harry watches his corrupt police captain explode in a car, he says "a man's got to know his limitations."

I thought of this quote today as the debate rages about compromising municipalities and other information technology-constrained yet personal information-rich organizations.

Several years ago I wrote If You Can't Protect It, Don't Collect It. I argued that if you are unable to defend personal information, then you should not gather and store it.

In a similar spirit, here I argue that if you are unable to securely operate information technology that matters, then you should not be supporting that IT.

You should outsource it to a trustworthy cloud provider, and concentrate on managing secure access to those services.

If you cannot outsource it, and you remain incapable of defending it natively, then you should integrate a capable managed security provider.

It's clear to me that a large portion of those running PI-processing IT are simply not capable of doing so in secure manner, and they do not bear the full cost of PI breaches.

They have too many assets, with too many vulnerabilities, and are targeted by too many threat actors.

These organizations lack sufficient people, processes, and technologies to mitigate the risk.

They have successes, but they are generally due to the heroics of individual IT and security professionals, who often feel out-gunned by their adversaries.

If you can't patch a two-year-old vulnerability prior to exploitation, or detect an intrusion and respond to the adversary before he completes his mission, then you are demonstrating that you need to change your entire approach to information technology.

The security industry seems to think that throwing more people at the problem is the answer, yet year after year we read about several million job openings that remain unfilled. This is a sign that we need to change the way we are doing business. The fact is that those organziations that cannot defend themselves need to recognize their limitations and change their game.

I recognize that outsourcing is not a panacea. Note that I emphasized "IT" in my recommendation. I do not see how one could outsource the critical technology running on-premise in the industrial control system (ICS) world, for example. Those operations may need to rely more on outsourced security providers, if they cannot sufficiently detect and respond to intrusions using in-house capabilities.

This puts a burden on the cloud providers, who fall into the "managed service provider" category that I wrote about in my recent Corelight blog. However, the more trustworthy providers have the people, processes, and technology in place to handle their responsibilities in a more secure way than many organziations who are struggling with on-premise legacy IT.

Everyone's got to know their limitations.
advice topcan