The Missing Trends in M-Trends 2017 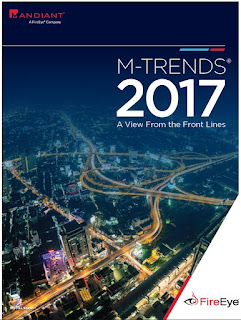 FireEye released the 2017 edition of the Mandiant M-Trends report yesterday. I've been a fan of this report since the 2010 edition, before I worked at the company.

Curiously for a report with the name "trends" in the title, this and all other editions do not publish the sorts of yearly trends I would expect. This post will address that limitation.

The report is most famous for its "dwell time" metric, which is the median (not average, or "mean") number of days an intruder spends inside a target company until he is discovered.

Each report lists the statistic for the year in consideration, and compares it to the previous year. For example, the 2017 report, covering incidents from 2016, notes the dwell time has dropped from 146 days in 2015, to 99 days in 2016.

How do these numbers look over the years that the M-Trends report has been published? Inquiring minds want to know.

The 2012 M-Trends report was the first edition to include these statistics. I have included them for that report and all subsequent editions in the table below.

As you can see, all of the numbers are heading in the right direction. We are finally into double digits for dwell time, but over 3 months is still far too long. Internal detection continues to rise as well. This is a proxy for the maturity of a security organization, in my opinion.

Hopefully future M-Trends reports will include tables like this.

Anonymous said…
there is a digit missing from the year:

Richard Bejtlich said…
Note to self: stats from M-Trends 2018 report:

Richard Bejtlich said…
Note to self: stats from M-Trends 2019 report:

Richard Bejtlich said…
Note to self: states from M-Trends 2020 report:

Richard Bejtlich said…
Note to self: stats from M-Trends 2021 report: