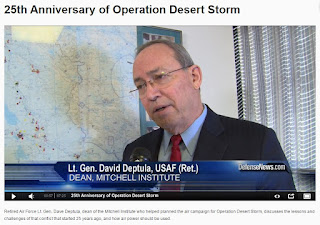 This weekend Vago Muradian interviewed Lt Gen (ret) David Deptula, most famous for his involvement as a key planner for the Desert Storm air campaign.

I recommend watching the entire video, which is less than 8 minutes long. Three aspects caught my attention. I will share them here.

First, Lt Gen Deptula said that Desert Storm introduced five changes to the character of warfare. I noted that he used the term "character," and not "nature." If you are a student of warfare and/or strategy, you are most likely in the camp that says warfare has an unchanging nature, although its character can change. This is the Clausewitz legacy. A minority camp argues that warfare can change both nature and character.

2. Desert Storm "normalized precision." Even though a minority of the ordnance delivered during the war were precision weapons, their use steadily increased throughout all later conflicts.

3. Desert Storm introduced joint and combined organization and execution. This was indeed quite a step forward, although I recall reading that that USMC airpower took measures to remain as separate as possible.

4. Desert Storm put the concepts of "effect-based operations" into action. There is no doubt about this one. Lt Gen Deptula talks about a disagreement with Gen Schwartzkopf's staff concerning disabling the Iraqi power grid. Air power achieved the effect of disabling the grid within 3-4 days, but Schwartzkopf's team used traditional attritional models, noting that less than a certain percentage of destruction mean mission failure. Deptula was right; they were wrong.

5. Desert Storm was the first major conflict where airpower was the centerpiece and key force. Call me biased, and no disrespect to the land forces in the Gulf, but I agree with this one.

The third and final noteworthy element of the interview involved Lt Gen Deptula's opinion of Islamic State. He said "it's not an insurgency. IS is a state." He said IS possesses the five elements of a state, namely:

I agree with his assessment. I also believe that Western leaders are unwilling to grant IS the legitimacy of it being a state, so they persist in calling IS names like ISIS, ISIL, Daesh, and so on. I see no problem with that approach, since it incorporates political sensitivities. However, that approach also aggravates the perception that Western leaders are out of touch with reality.

Anonymous said…
"expectations of low casualties, for both sides."

As I'm sure you're aware, the Germans felt the same about blitzkrieg and could be said to be correct in the huge numbers of Russian surrenders during the invasion of the East. Specifically, the idea is attributable to General Guderian:

A conflict consisting of one 100-hour campaign is probably comparable to the following:

In WWII, General Botho Elster, commander Marschgruppe Sud, supposedly wanted it known that he was surrendering to the P-47 pilots. No ground forces had fired on the German troops, "and as near as anyone knew at the time, it was the only time in the history of warfare that a large, completely equipped army had been defeated by air attack alone to the point that surrender was the only option open to them." Cite is from "P-47 Pilots -- the Fighter-Bomber Boys" by Tom Glenn, which in turn cites, "War As I Knew It" by General Patton.
4:11 PM