What Gets Measured, Matters 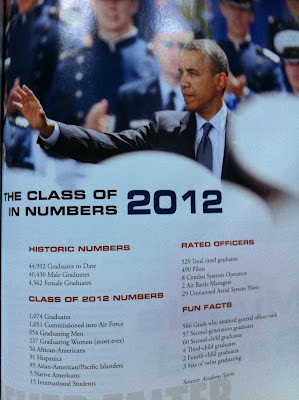 I received the latest issue of my alumni magazine, Checkpoints, today. It's graduation season, so the content included statistics about the latest graduating class as shown at right.

This relates to a recent post, Whither United States Air Force Academy?, where I said the skill most needed to help grow the nation is digital defense.

The statistics the Checkpoints editors chose to print, however, reminded me of the Academy's current focus. Notice that between the demographic information and the "fun facts" we see details on so-called "rated officers," reprinted below:

To me, these statistics reflect the idea that "what gets measured, matters." Clearly the bias at USAFA continues to be towards flying. I get the "Fly, Fight, Win" message. I repeat it often at inappropriate times thanks to effective brainwashing techniques.

...or something like that. Don't dwell on the categories or counts: focus on the message. Could you imagine a military academy producing young people with skills like that? Imagine the impact they could have inside and outside the military. Think of the growth in civil aviation after World War II thanks to the influx of former military pilots.

Seeing statistics like I created will be a signal that we have a chance of winning the ongoing cyberwar.

dano said…
Actually I think it's worse than you think.
4:29 PM

Paul said…
As a previous instructor of cyber operators in the Air Force, nothing would have made me happier than to see that second group of graduates and AFSCs.

For now i'd say however that as far as service components, the Air Force is doing the best as far as having a pipeline for training cyber operators, and each and every new officer in the Air Force whether a "cyber" AFSC or not, has an appreciation for offensive and defensive cyber capabilities.