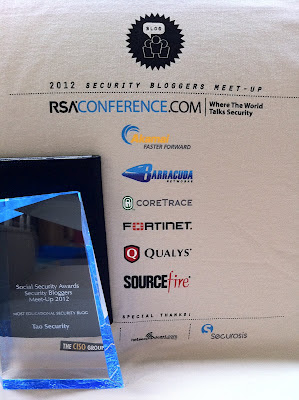 I'm pleased to announce that TaoSecurity Blog won Most Educational Security Blog at the 2012 Social Security Bloggers Awards. I attended the event held near RSA and spent time talking with a lot of security bloggers and security people in general.

I'd like to thank the sponsors of the event, depicted on the photo of the back of the T-shirt at left. Props to whomever designed the shirt -- it's one of my favorites. The award itself looks great, and the gift certificate to the Apple store will definitely help with an iPad 3, as intended!

Long-time readers may remember that I won Best Non-Technical Blog at the same event in 2009.

Winning this award has given me a little more motivation to blog this year. I admit that communicating via Twitter as @taosecurity is much more seductive due to the presence of followers and the immediate feedback!

And speaking of SC Magazine, they awarded my company Mandiant their best security company award.

Grady said…
Congrats on the award, very well deserved. I look forward to possibly seeing what 2012 brings for the blog.
8:37 AM