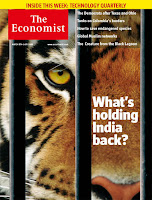 I would like to note two articles on security spending. I learned of the first by listening to the audio edition of The Economist, specifically Anti-terrorist spending: Feel safer now?. The article summarizes a report (Transnational Terrorism, [.pdf]) by The Copenhagen Consensus, a think tank that analyzes government spending. The Economist says:

The authors of the study calculate that worldwide spending on homeland security has risen since 2001 by between $65 billion (if security is narrowly defined) and over $200 billion a year (if one includes the Iraq and Afghan wars). But in either case the benefits are far smaller.

Terrorism, the authors say, has a comparatively small impact on economic activity, reducing GDP in affected countries by perhaps $17 billion in 2005. So although the number of terrorist attacks has fallen, and fewer people have been injured, the imputed economic benefits are limited — just a tenth of the costs.

That does not necessarily mean the extra spending was wasted. The number of attacks might have been even higher. In 2007 Britain's prime minister, Gordon Brown, said his country had disrupted 15 al-Qaeda plots since 2001. Yet so big is counter-terrorism spending and so limited is terrorism's economic impact that, even if 30 attacks like the London bombings of July 2005 were prevented each year, the benefits would still be lower than the costs. The authors conclude that spending is high because it is an insurance policy against a truly devastating operation such as a dirty bomb...

There were fewer terrorist attacks, they say, but the balance of costs and benefits is still poor—between five and eight cents of benefit for every dollar spent. But international co-operation to disrupt terrorist finances would be cost-effective, they think, producing $5-15 of benefits for each $1.

I am not here to debate the politics of the event, and if I get any comments about that I'll just delete them. Rather, I find the effort to perform a cost-benefit analysis to be interesting. I highly prefer a cost-benefit approach (such as that recommended but not capable of being fulfilled in Managing Cyber-Security Resources) instead of so-called "return on security investment." It's fascinating to see a debate about whether spending is justified if "nothing bad happens." If nothing bad happens, was the money wasted or was it effective?

A second study is available via SecureWorks, titled Forrester Total Economic Impact™ of SecureWorks’ SIEM Service. Ok, this is a vendor pitch, but I thought the approach taken by the Forrester researchers to quantify the benefit of security operations could at least be a template for others.

Pacific Gas and Electric Company (PG&E), one of the largest natural gas and electric utilities in the United States, uses SecureWorks’ SIEM Service at the monitoring level for more than 90 systems in its network. In in-depth interviews with PG&E, Forrester found that the organization achieved comprehensive, enterprise-level security monitoring at a lower cost than the alternative of implementing and maintaining an in-house 24x7 Security Operating Center (SOC) and SIEM solution. PG&E also achieved a lower risk of loss due to security breaches, and was better able to track security performance for audits and reporting, thus building credibility for their security program within the organization and with clients. Forrester calculated that PG&E achieved a return on investment (ROI) of 193%, with a nearly immediate payback period.

Ugh, yes I detest "ROI," but check out the whitepaper to see how they justified the security program. You can download it without giving your life details away.

rnaLR said…
This comment has been removed by a blog administrator.
4:43 AM

Ben said…
The Copenhagen Consensus has done a similarly interesting tradeoff analysis on global warming and curbing carbon emissions (including things like Kyoto). They've reached conclusions that have been quite controversial, in that they suggest putting money into areas that actually provide measurable improvements for humanity, rather than dumping trillions into a program (like Kyoto) that will only limit the rise in temperature, rather than eliminate it altogether. Bjorn Lomborg's "Cool It" is a quick read (book) and is based primarily on this type of economic tradeoff analysis.

I mention this because I think the overall points are generally the same: politicians seem much more inclined to spend lots of money on flashy, FUD-based, apocalyptic rhetoric, than to invest what would in effect be less money into other programs, even though those programs may have far greater impact. This is similar to the notion of continuing to wage war, because it provides a cause to rally around, rather than spending money on humanitarian aid in order to remove the stressor(s) that lead to conflict, and ultimately to military intervention (I just saw a paper on this recently, but can't find the link now, sorry).
8:34 AM

Anonymous said…
The fudge factors used to convert the intangibles to money for cost-benefit analysis tend to invalidate most such analysis. I'd rather see a more honest cost-effectiveness measure first.
10:17 AM