June 28, 2018
When you hear the word "SOC," or the phrase "security operations center," what image comes to mind? Do you think of analyst sitting at desks, all facing forward, towards giant screens? Why is this?

The following image is from the outstanding movie Apollo 13, a docudrama about the challenged 1970 mission to the moon.

It's a screen capture from the go for launch sequence. It shows mission control in Houston, Texas. If you'd like to see video of the actual center from 1970, check out This Is Mission Control.

Mission control looks remarkably like a SOC, doesn't it? When builders of computer security operations centers imagined what their "mission control" rooms would look like, perhaps they had Houston in mind?

Or perhaps they thought of the 1983 movie War Games? 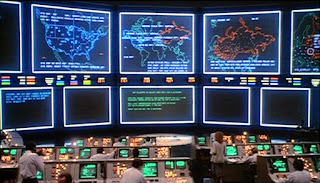 Reality was way more boring however: 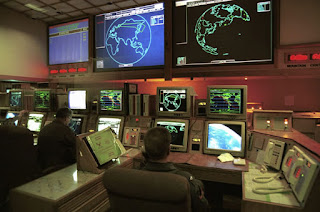 I visited NORAD under Cheyenne Mountain in 1989, I believe, when visiting the Air Force Academy as a high school senior. I can confirm it did not look like the movie depiction!

Let's return to mission control. Look at the resources available to personnel manning the mission control room. The big screens depict two main forms of data: telemetry and video of the rocket. What about the individual screens, where people sit? They are largely customized. Each station presents data or buttons specific to the role of the person sitting there. Listen to Ed Harris' character calling out the stations: booster, retro, vital, etc. For example: 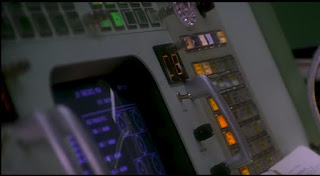 This is one of the key differences between mission control and any modern computerized operations center. In the 1960s and 1970s, workstations (literally, places where people worked) had to be customized. They lacked the technology to have generic workstations where customization was done via screen, keyboard, and mouse. They also lacked the ability to display video on demand, and relied on large television screens. Personnel with specific functions sat at specific locations, because that was literally the only way they could perform their jobs.

With the advent of modern computing, every workstation is instantly customizable. There is no need to specialize. Anyone can sit anywhere, assuming computers allow one's workspace to follow their logon. In fact, modern computing allows a user to sit in spaces outside of their office. A modern mission control could be distributed. 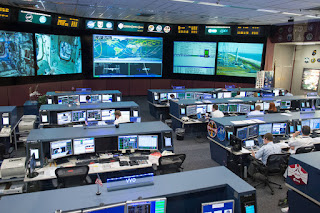 It looks similar to the 1960s-1970s version, except it's dominated by screens, keyboards, and mice.

What strikes me about every image of a "SOC" that I've ever seen is that no one is looking at the big screens. They are almost always deployed for an audience. No one in an operational role looks at them.

There are exceptions. Check out the Arizona Department of Transportation operations center. 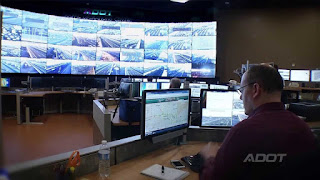 Their "big screen" is a composite of 24 smaller screens showing traffic and roadways. No one is looking at the screen, but that sort of display is perfect for the human eye.

It's a variant of Edward Tufte's "small multiple" idea. There is no text. The eye can discern if there is a lot of traffic, or little traffic, or an accident pretty easily. It's likely more for the benefit of an audience, but it works decently well.

Compare those screens to what one is likely to encounter in a cyber SOC. In addition to a "pew pew" map and a "spinning globe of doom," it will likely look like this, from R3 Cybersecurity: 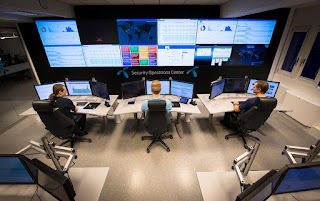 The big screens are a waste of time. No one is standing near them. No one sitting at their workstations can read what the screens show. They are purely for an audience, who can't discern what they show either.

The bottom line for this post is that if you're going to build a "SOC," don't build it based on what you've seen in the movies, or in other industries, or what a consultancy recommends. Spend some time determining your SOC's purpose, and let the workflow drive the physical setting. You may determine you don't even need a "SOC," either physically or logically, based on maturing understandings of a SOC's mission. That's a topic for a future post!
philosophy security operations center soc topcan

Anonymous said…
The big screen at our SoC was to impress potential clients!
9:23 PM

Anonymous said…
The SOC I manage has the health of the SIEM on one screen and a security twitter feed on the other.

The SIEM health screen to show if the SIEM is properly working.